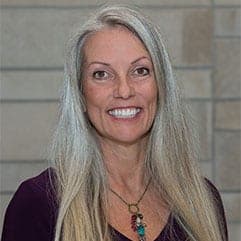 Callie Marie Rennison, PhD is a Professor in the School of Public Affairs, as well as the Director of Equity, and Title IX Coordinator for the University of Colorado Denver and Anschutz Medical Campuses. Her area of research focuses on the nature, extent, and consequences of violent victimization with an emphasis on research methodology, quantitative analysis, measurement, and crime data. Her research examines violence against several groups including women, African Americans, American Indians, and Hispanics. In addition, much of her research has focused on victim interaction with the criminal justice system and college student victimization. Her research has appeared in many venues including prestigious journals such as the Journal of Quantitative Criminology, Justice Quarterly, Violence and Victims, and Violence Against Women. In addition, she has authored several books. In 2016, Callie she was awarded the Bonnie S. Fisher Victimology Career Award from the Division of Victimology in the American Society of Criminology. She has also served on a National Academies Committee examining domestic sex trafficking of minors in the United States and was a Senior Researcher at the Department of Justice's Bureau of Justice Statistics.